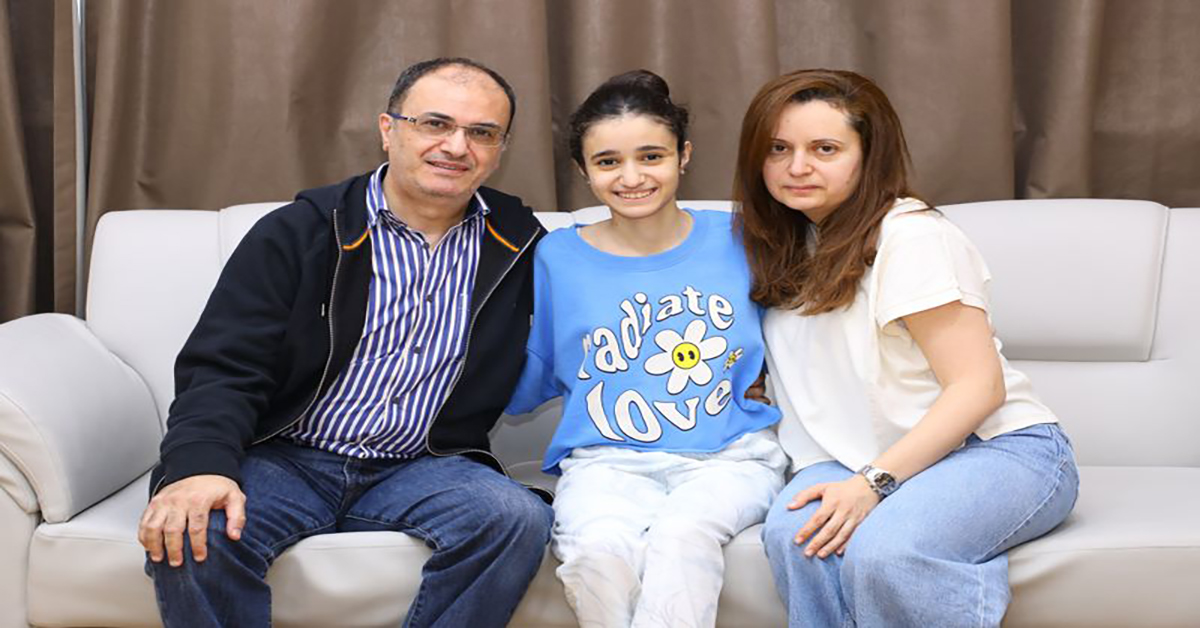 Dubai: A 13-year-old Jordanian girl with adolescent idiopathic scoliosis has been given a new lease of life after doctors at a Dubai hospital performed Vertebral Body Tethering (VBT) on her, said to be for the first time in the MENA region.

The unique medical accomplishment for the UAE, the minimally invasive surgery was carried out last week at Burjeel Hospital, Dubai.

Salma Naser Nawayseh’s parents first noticed the curve in her spine in April 2022. They were stunned when doctors diagnosed her with scoliosis, a condition in which there is an abnormal lateral curve of the spine. Scoliosis can develop in infancy or early childhood. However, the primary age of onset for scoliosis is 10-15 years, occurring equally among both genders.

While scoliosis affects 2-3 per cent of the population, most cases are mild and do not require invasive treatment. If left untreated, moderate to severe scoliosis can lead to pain, increasing deformity, and potential heart and lung problems. Corrective surgery is essential in cases like Salma’s, where the patients have large curves.

After consulting many doctors in the UAE, Salma’s parents approached Dr. Firas M. Husban, Consultant Orthopedic Surgeon, at Burjeel Hospital for a permanent solution. According to Dr. Husban, when Salma, a grade 9 student, went to him, she had a thoracolumbar curve of 65 degrees. Due to her condition, she suffered deformity of the back with shortening of the trunk, lower back hump, unlevelled pelvis, and back pain.

“Adolescent idiopathic scoliosis is the most common type and is usually diagnosed during puberty. The three treatment options for such patients are observation, bracing, or surgery. While bracing is an option in patients with mild forms of scoliosis, in Salma’s case, she required surgery to correct the deformity,” said Dr. Husban, who informed Salma’s parents of the new minimally invasive treatment for scoliosis.

The traditional option to correct scoliosis is spinal fusion surgery, where two or more vertebrae are permanently joined into one structure using screws and rods. While spinal fusion is the most common surgery to treat scoliosis, it limits spinal mobility and subsequent growth. In 2019, the USFDA approved a new treatment called Vertebral Body Tethering (VBT), a minimally invasive technique that allows for continued growth without fusion while preserving motion and flexibility.

The new treatment enables fusion-less spine correction, allowing the patient to experience the full range of motion and further growth. Its other advantages include discreet incisions, minimal trauma, fewer complications, and faster healing. As Salma had not reached full skeletal maturity yet, she was a perfect candidate for this procedure, according to the doctor.

Explaining the procedure, Dr. Husban said, “As opposed to spinal surgeries that involve cutting into the back and manipulating the spinal cord and nerve roots, in this surgery, we make discreet incisions in the abdomen through the endoscope. A flexible cord, called the tether, is attached to the spine on the outside of the curve through bone screws. Tension is applied to the tether to straighten the spine. The tether puts pressure on the outside, allowing the inside of the spinal curve to grow. Because VBT is minimally invasive, there is little trauma to the delicate tissues of your back. As a result, there is less blood loss, less postoperative pain and speedier recovery time compared to the spinal fusion surgery.”

Right after surgery, Salma’s spinal curve showed improvement. According to Dr. Husban, the curve will continue to improve, and the tether will guide the growth of the spine as the body grows.

“The patient is recovering well after the surgery. After two weeks, Salma can go back to school. Four weeks later she can return to full activity with no restrictions and can start playing sports,” he adds.

Salma’s parents are thrilled at the outcome. “She started walking the second day after surgery. We are happy that our daughter was eligible for this surgery. We look forward to our daughter holding the racket again and resuming tennis. We thank the medical and non-medical staff at Burjeel Hospital, Dubai, for taking good care of us. We are grateful to Dr. Husban for making this surgery available in our region,” they said.

First time in the region

VBT is currently performed in very few countries, including the US, France, and Germany. This is the first instance of the surgery being performed in the GCC and North Africa, the hospital claimed in a press release.

Not every patient with adolescent idiopathic scoliosis is a candidate for VBT. It would ideally be performed in children and teens in the age group of nine years and above who are still growing. Moreover, the procedure is most effective in patients with a curve of 45 to 65 degrees. Despite being a newer treatment, the cost of VBT is similar to other treatments for scoliosis.

Dr. Shajir Gaffar, CEO, VPS Healthcare (Dubai and Northern Emirates), said: “It is a great privilege to conduct the first VBT surgery in the MENA region at Burjeel Hospital, Dubai. The surgery is a testament to the advanced medical capabilities of the UAE. It took months to get the approval and instruments ready for the procedure. We plan to further expand our scoliosis treatment facilities to help affected patients enjoy a better quality of life. We are hopeful that the success of the surgery will inspire people from all over the Middle East to come to the UAE for the procedure.”